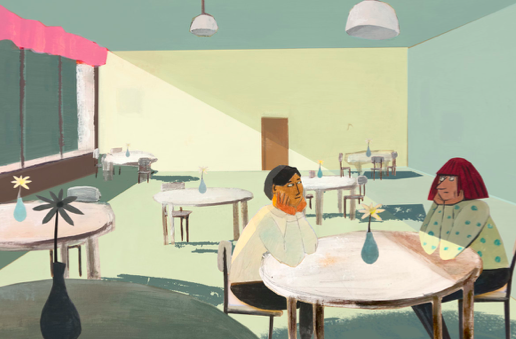 A woman drives into a city where she used to live, to meet a man she once cared about. Their meeting takes place in a coffee shop, where they have met many times before. The woman realizes that the man is still not indifferent to her. Seemingly trivial elements and gestures bring back memories. In the man’s yellow socks, she suddenly sees all the different socks he once used to wear. A common gesture of him rolling up the sleeves multiplies in front of her eyes, as if the past was there together with the present. Their conversation briefly tells the story of their relationship. It turns out that they deviated from each other over time. When he reached out to her, she ran away. And when she finally decided to return the gesture – he was already in a different stage of his life. As they talk, she realizes that “their time” is over and that it is impossible to regain intimacy and connection they once had. Only by accepting this, she can feel unblocked and free. And finally,she can move on

Back to latest productions